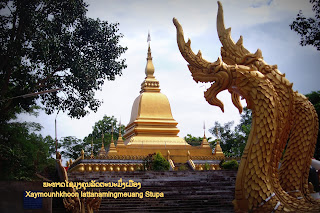 Just opposite of the stairs to the museum there are similar stairs to climb, leading to an 18 meters high Stupa. The stupa was built in 14th century to allow all people of the region to come together, to celebrate religious festivals. When under French control, the area of the stupa was made into a war camp. During the first Vietnamese war the stupa was destroyed and only bricks were left. Reconstruction started in 1994 and was completed 3 years later. Religious celebrations are held at the stupa during the day of each full. Since April 2010 there is also a golden, 15 metre-high Buddha statue watching over Oudomxay from the top of Phou That, seeming to spur Oudomxay people to new religiousness. Enjoy the view over the town and see the stupa and Buddha shining in the sunset. The monks at the nearby temple are always happy to practice their English with foreigners.
Phuthat Stupa (full name Xaymoungkhoun Latanamingmeuang Stupa) is the most prominent Vat Phuthat in Oudom xay, located on the top of the hill in the center of Meuang Xay town. The stupa was built for all Buddhist followers to celebrate religious festivals and other ceremonies. It is presumed that the stupa was originally built by Thai Leu tribe during the 14th century when the former King Phachao Xaysetha Thirath was still on his throne. Every full moon day the religious celebration is held at the stupa. The Stupa’s height is 18 meters from the bottom to the top. The dimension of the stupa is 18 m x 18 m. It’s recognized as the symbol  of  Oudomxay Province. Visiting the stupa means you reach Oudomxay.
Phachaosingkham Temple 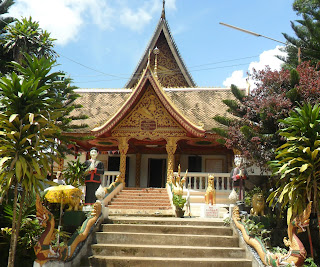 Phachaosingkham Temple is in Meuang La Disrtrict, around 28 Km from Xay town on the direction to Phongsaly. It’s a sacred and famous temple in Oudomxay or we can say even in Laos. The temple was built more than 2,000 years ago. It used to be a very small temple in the past. People from different places go there almost everyday just for their own purposes. According to people - the most sacred temple. If you want to find out more about the temple we would suggest you to visit it just to see the real situation there. A place where you should not miss. You will get what you ask for 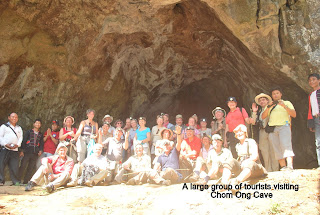 Chom Ong Cave is one of the most interesting tourist destinations in the region and recognized as one of the most longest caves in Southeast Asia. the length is 15,827 km.  A recently rediscovered natural attraction located about 45 km from Xay town.  The increasing number of tourist visiting the cave is getting higher and higher. We offer  two different Chom Ong cave tours - The first one is the 1 day Chom Ong Cave tour  and the second one is the 2 day 1 night Chom Ong Cave tour. For more information just contact the  Tourist Information Center.
Nam katwaterfall

Namkat waterfall is located in Ban Faen Village, Xay District, Oudomxay Province, 23 Kilometers away from Xay town. Namkat waterfall is also one the most attractive tourist attractions in Oudomxay. There are lots of big trees “Untouched pristine forest” and different species and plants as well as big stones or boulders around and you can enjoy different activities. For instance, Zip-line, Rock climbing, Trekking, biking, cable bridge over big trees, Elephant riding,  swimming, tree house and others.  It’s a place where you shouldn't miss when you are in Oudomxay. 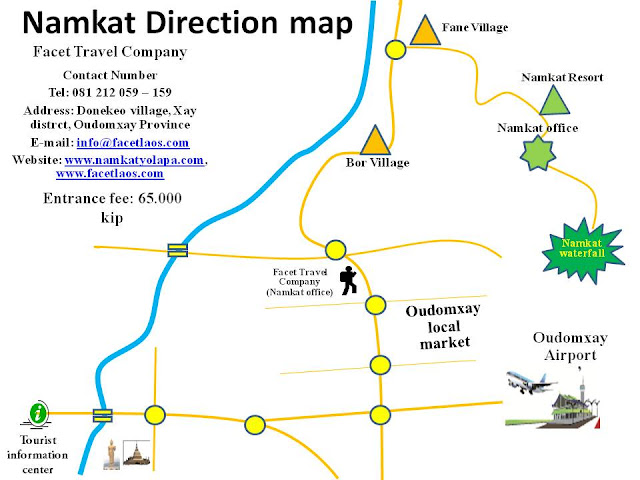 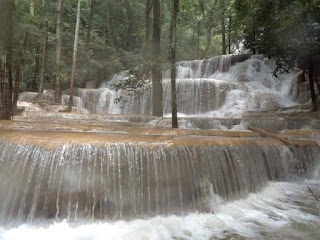 Talae  is an amazing waterfall, located in Ban Talae from Meung Houn town about 42 km. The waterfall is in the district protected area. When you reach the waterfall you will also get fresh atmosphere under the pristine forest. The length of the waterfall is about 600 meters and consists of 7 different beautiful waterfall levels. The best time to visit this waterfall is during June to February of every year.  A famous picnic place for the local people there. 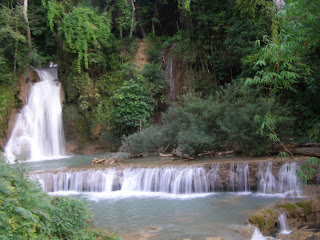 Nam Haeng is an extremely beautiful waterfall in Ban Katangya Village, Meuang Houn District. (24 Km from Meung Houn to the waterfall). There, lots of natural plants and species can be found and seen. Every where is green and you can also swim in the pure water there. It’s a famous picnic place for Meuang Houn residents, especially on weekends. It’s said that people love to refresh themselves on weekends after 5 days working.
Nam Hin lake 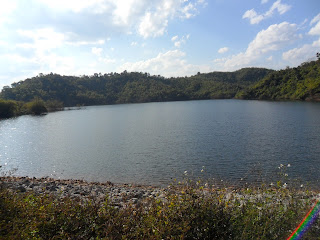 It’s a long lake and situated is in Ban Houay Oun village,  from Meuang Xay town only 8 km. Lots of small rivers flow down from the mountain to the lake. That’s why the lake becomes wider and bigger. The local people there do organic farming around the lake. A famous place for weekend picnic for Lao families. Also a place where the government always release fingerings or young fishes every year there. There are restaurants there and some boats, so you can also enjoy the boat trip around the lake by yourself. How to get there? just by Tuk -Tuk or rent a motorbike.
Akha ethnic group in Ban Aa No Village 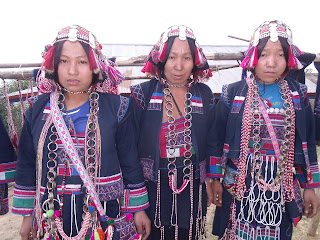 Akha is one famous minority group in Oudomxay.This Akha tribe moved originally from China to Vietnam and finally to Laos in 1882 (around 129 years ago). Aa No is the name of the leader who led his people (40 families) to Laos and the village was named Aa No after he passed away. The village’s population continued to increase, including through migration of Akha people from other places. Aa No Village is situated in the Northeast of La District (Meuang La), about 32.5 km from Meuang La town. Access to the village is possible all year round, but it’s quite hard during the raining season. There, you can experience more about their traditional culture, daily lifestyle, and many more things in the village. It’s extremely a very interesting place for people to discover, especially during the Akha New Year celebration on February of every year.
Ban Nyor -  Thai Lue minority with their handicraft production acitivities 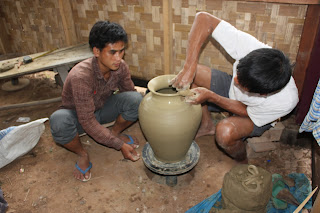 Ban Nyor is situated in Meuang Beng, 53 km from Meuang Xay town on the road to Pakbeng in the economic corridor between Chinese in the North Vietnam in the East and Thailand in the West. This unique location provides many economic as well as touristic opportunities. In Ban Nyor you will also see and learn on hand-made pottery production system, cotton processing, textile weaving and natural cotton dying. These are their cash income generating activities. Moreover, their traditional food, Thai Lue homestay, traditional show and Baci ceremony are the most enjoyable things that you can share together with them (at least once in a life time). 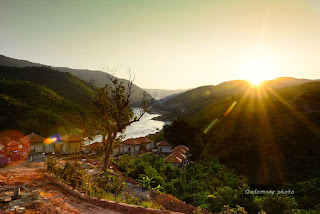 Welcome to Pak Beng town, situated on the narrow banks between the Mekong and Beng river, in the Southwest of Oudomxay province. Pak Beng, which means “mouth of Beng river” offers a variety of tourism services including numerous hotels, guesthouses and restaurants. It is a popular location for taking a rest after a long boat cruise on the Mekong. During your stay you can visit the colorful market and the temples in town, and discover the unknown hinterland of the district. As an important doorway to Oudomxay province you can continue your journey from Pakbeng by traveling via Xay and La District to Muang Khoua, Nong Khiew, Phongsaly, Oudomxay town, Vietnam and China. The tourist office branch in Pak Beng (50m form the boat landing) is delighted to help you with any questions regarding travel possibilities throughout the province. 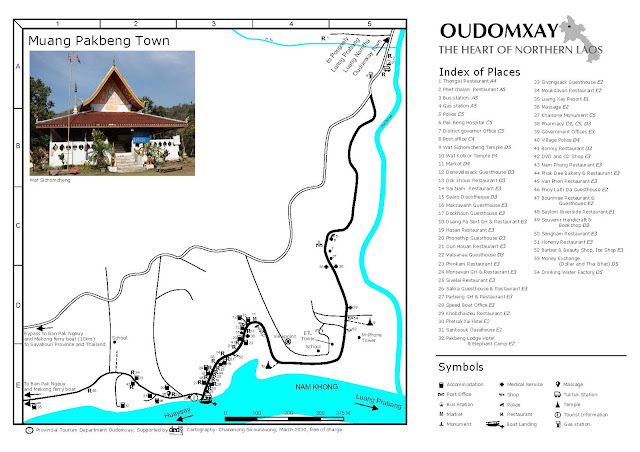