Boat racing festival - Boun Souang Heua - is an important part of the traditional agricultural cycle. The festival pays tribute to the naga (mythical snake water deities) with the intention of attracting the naga from the inundated rice field back into the river. 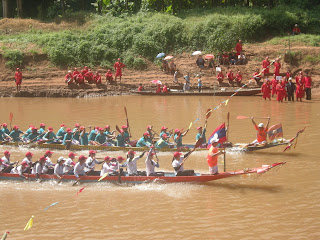 This festival also commemorates the end of the rainy season and brings luck for an abundant harvest.
Traditional racing boats are carved using one single tree. The boats belong to a village and are usually kept in a shelter on the temple grounds and come out only once a year for the race. Several days before the race the boats are cleaned and presented with offerings because the boats are considered sacred items.
These boats can hold approximately fifty paddlers. The morning is devoted to women’s crews and the afternoon to men’s crews. The starting point is two kilometers upstream and the competition is between two boats at a time. The loser is eliminated. After the final race, all the boats participate in a final competition/show, which is rather spectacular. The winners receive a trophy, a silver cup and cash.
While the boat racing has become a focus of entertainment, athletics and commerce, the Boat Festival is really an homage to water divinities and the Nagas, who are protector of the country.
Boat racing festival usually held every years in another districts around Oudomxay porvince such as  Meuang xay, Meuang Ngar, Meuang Pakbeng and Meuang Houn. 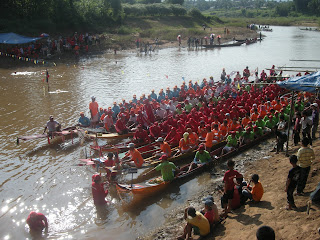