Akha are the fourth biggest ethnic group in Oudomxay and form part of the Lao Soung like the Hmong people. Acca immigrated from the Tibetan Plateau, Northwest of Oudomxay, several hundred years ago. Their language is part of the  Tibe to-Burmese linguistic family. Their villages are situated in remote areas. However, coming for example to Oudomxay town market, Acca women are easily recognisable by their traditional hat, covered with coins representing the wealth of the household. 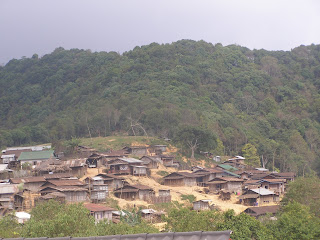 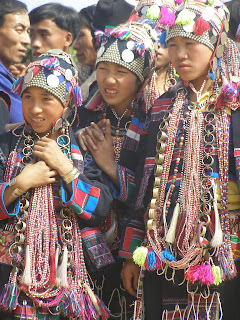 Name: Aka tribe is called with many different names, but they choose calling themselves “Akha” and other tribes call them “Hmong” or “Lao Kor” but they prefer “Akha” . According to the reality there are many branches of Akha tribes such as, Puly Akha, Jjor Akha, Jpear Akha, Moutarn Akha, Suma Akha and Paya Akha.


Language:  Each Akha branch has their own speaking language, but no writing pattern.  Akha language is identified in a group of China - Tibate.


Belief, Tradition, Culture and Sociality of Aka tribe: Akha people believe in their own ancestors and other sacred supernatural things and it’s hard for them to change what they have been practicing. They do respect different spirits like spirits (Ghost) of the father, spirits (Ghost) of the mother, spirits (Ghost) of the house, spirits (Ghost) of the village and others. The most important is the ancestor- the supernatural spirit is believed to protect and take care of the family members. Every house has its own altar for worship. Moreover, they do believe in tree spirits, the spirits of the forest, spirits of the river and others. Due to they believe in many different things that’s why there are many dissimilar ceremonies in a year and lots of steps in one ceremony. They will call the sacred spirits for protection and drive the bad evil spirit and sickness away from their houses and villages. The only thing they wish to have and need is happiness with the family. The Akha tribe is very strict on traditional and cultural practices like “Do’s and Don’ts”. For instance, do not touch the wooden gate around the village, do not take the things that is put on the house door, do not take or bring raw meat pass through the village, do not eat the new born animals like deer, pig, cattle and buffalo and so on.  Furthermore, courtship is not allowed in the house as well as singing and dancing. The boy and girl have to do their courtship at the rice storage. When a woman gives birth of a new baby without having a husband she has to go to the forest for giving such birth. One more issue, if a woman gave birth of twins (2 babies) - one has to be killed. The funeral of a widower – divorced woman has to be held outside the village.


Family: The main race of the family is father’s clan.  After marriage, the husband and his wife have to move and built a separate house from the parents, but close. Like one family one house. The man plays an important role in the Akha family; it means men have more power than women.


House: Most of the Akha’s house is always built on the hill where there is sunset and nice wind. The most important thing is the water source has to get close to the village in order to make it more comfortable for their daily life. The agricultural production area is always around the village.  Before building a house, a sacred ceremony on house construction area selection has to be organized in order to ensure the happiness and safety of the whole family. This is to inform and ask permission from the protector of the area for building a new house and to see if it’s appropriate or not. The house has two floors.  The first floor which is attached to the ground is for animals like pig, dog, duck, chicken, horse and others. Firewood, equipment and materials are also put there.


Akha’s night life: Since there are separate male and female bedrooms. When son in law his father in law trying to look for their wives for having sex  in the night time without lights and they run into each other by accident. A scarified animal like pig has to be killed in order to solve the said problem.


Death: There are lots of steps in operating a funeral of an Akha. It is sometime very complicated. It is said that the purpose of this is to make the dead person happy after death and to heaven and to avoid the sickness and problems for the family members behind. The corps or dead person is buried.


Literature: Akha people have their own traditional Akha singing, song, poem, dancing, festival and so on.  The set of clothes for both male and female is decorated and sewed with many different types of colors, pearl, coin, silver and others.


Economy: The main occupation is agriculture. For instance, up land rice planting, vegetable cultivation, cotton plating, and maize plantation. Moreover, they also focus on animal rising like pig, chicken, dog, buffalo, cattle, horse and so on. Akha people are very good at hunting.