Welcome to Meuang Nga
Meuang Nga is a small district, situated in the Southwest of Oudomxay Province. is about 66 Km away from Xay town. Meuang Nga is close to the Mekong River and also Luang Prabang. The road to Meuang Nga is still in a bad condition. The existing nature has not changed much comparing to the past. In addition, a famous resort - Tourist lodge is running there in YoiHai Village with Khmu  lifestyle. 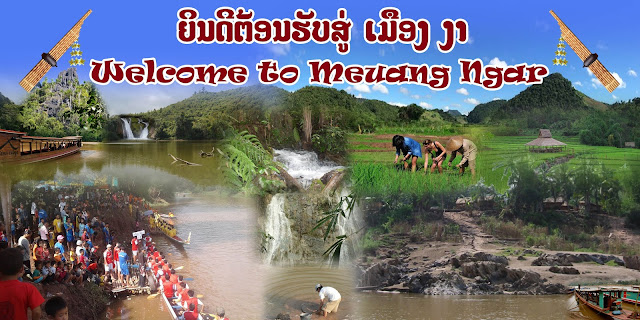 What's to see in Meuang Nga

- Walk around the town to see what people do in the morning and evening time.
- Take a trip to  Lard Han temple for your luck.
- Take a trip to Nyoi Hai ( khmu minority village )  to explore the real life of Khmu people - Take a drive and ride (Car & motorcycle) to explore Houay kood cave.
Houay Kood cave
Houay Kood cave is in Houaysalak Village, Nga District, about 12 Km far from Nga town and still another 5 Km from the village to the cave. The road is in a bad condition and very hard to get there during the raining time. The width of the cave is around 3 – 5 meters and the length is more than 200 meters, small, but beautiful. There are different karsts and nice forest around outside the cave.
Houay Kood cave was discovered many years ago by a local man while he was hunting. After that the cave was named Houay Kood because the cave is situated by the Houay kood stream. After the cave  became well known  – people started to visit the cave more and more.


Nyoi Hai Village – Khmu minority
Nyoi Hai vilage is 100 % Khmu tribe and settle by the Mekong River, around 80 Km far from Nga town. People can get there by boat or vehicles, but the road is in a very bad condition and very difficult to reach there during the raining season. The most important thing about the village is they still keep their own traditional practice regarding their livelihood, culture and daily lifestyle. There is a resort nearby the village and owned by a business man. The target market of the resort is French tourist. The resort also provides Tourism Development Fund to the village regularly as well as setting some different activities for villagers to be apart in increasing their daily cash income. Once, a group of tourist who visited the village donated a budget to the village in order to build a primary school. The village is now recognized as one cultural and natural tourist destination by the Mekong River.

Around 200 years ago, there were 2 families from Hoau Xieng villlage, Luang Prabang Province came to the area and then built a small shop for local trade - buy and sell different None Timber Forest Products. The shop was built under a big tree ( Hai tree) in order to be safe. After a few month, there were 5 families from different places came to settle together with them. They had been living there for almost 20 years. The big tree started to get dried and then died, so they decided to name the village Ngoi Hai because of the big tree that they had been spending their life under it for many years. The name of the village has been using until present time.
Houay Yerng waterfall
HouayYerng waterfall is about 75 Kilometers far from Nga Town. Still another 5 Km from Houay Yerng village to the waterfall, so to trek there is about 1 hour and 40 minutes. The trekking trail is along a stream and pass through some pristine forests. The height of the waterfall is 15 meters and 2 – 5 meters wide. There is another waterfall called Tad Mok and situated just behind the Houay Yerng waterfall, it takes only 10 minutes to get there. Its height is 9 meters and 2 – 5 meters wide. The area is covered by beautiful nature.
Houay Chan waterall
Houay Chan waterfall is 55 Kilometers from Nga Town and from Houay Chan village to the waterfall is 2 minutes ride. The area is appropriate for relaxing and spending peaceful time with the nature. There is a large cliff along the waterfall with the length of 300 meters.
Luang Cave
Luang Cave “two caves together” from the village to the North is about 1 hour and 50 minutes by walking. The first cave is smaller than the second one, its width is 1 – 2 meters and 4 meters high and the length is 100 meters. Spend around 30 more minutes to the second waterfall, its width is 3 – 10 meters, the height is 3 – 15 meters and its length is 125 meters. The area is rich in natural resources with large forests.
Nong Lom reservoir
Nong Lom reservoir is 25 Kilometers from Nga Town; it takes around 1 hour and 24 minutes to walk from the village to reach there. Nong Lom is an amazing reservoir, which is situated on the top of a mountain. The width of the reservoir is 129 meters to the North, 149 meters to the South, 48 meters to the East and 118 meters to the West. The said area used to be a former farming area of the local residents who lived nearby. The area is covered by 70 : of young new forests and 30 % of existing old forests.
Houay Sad
Houay Sad (Under the supervision of Saen Chod Village) is one of the most beautiful waterfalls in Nga District. About 40 Kilometers from Town to the Village and it takes around 10 minutes to get there by motorcycle. The height of the waterfall is 10 meters with comfortable space around. Unfortunately, some big trees were cut and destroyed by the people there. The related government is now trying to preserve the said area for future tourism development.


Where to stay in Meuang Nga District

How to get to Meuang Nga
Use the public transportation: There is only one bus a day at 11:30.  It takes around 3 hours to Meuang Nga and you can get the bus ticket one hour before departure. Another option is to take a boat (Boat trip) to the resort by starting from Luang Prabang and Pakbeng.