Beng is a small district, is on the direction to Pakbeng and situated between Xay Town and Hoon town, approximately 64 Kilometers from Xay town. The district covers an area of 2,221 Square Kilometers, 80 % is mountainous and lowland is 20 %. There are 5,819 households, the total population number is 34,745 – female is 17.314. The district density is 16 persons per 1 Kilometer. The existing tribes in the district are Thai Lue, Yang, Tai, Khummu and Hmong. The most famous cultural tourism target village is Ban Nyor – an old Thai Lue Village. It’s famous for textile weaving, cotton processing, pottery production, basketry and homestay. Most tourists are interested in these kinds of existing activities. Mostly, they are from travel agencies. The village is advertised through different tourism companies and it’s now well-known and become one of the most interesting tourist destinations in Oudomxay Province, particularly in beng District. Furthermore, there are still some unexplored natural attractions. All these things are going to be done soon in the near future. 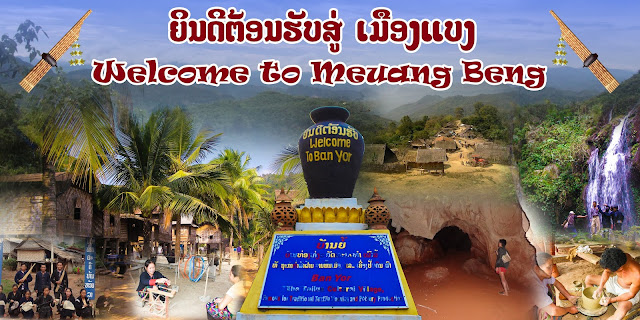 Acctivities you can do in Beng District
- Walk around the town to see what people do in their daily life.
- Visit Namchea waterfall - one of the beautiful tourist attraction..
- Take a short walk around Meuang Beng town to explore the real life of  people there.
- Take a walk, drive and ride (Car & motorcycle) to Ban Nyor village where you can do your homestay -  and experience the real Tai lue culture.


Ban Nyor is situated in Meuang Beng, 53 km from Meuang Xay town on the road to Pakbeng in the economic corridor between Chinese in the North Vietnam in the East and Thailand in the West. This unique location provides many economic as well as touristic opportunities. In Ban Nyor you will also see and learn on hand-made pottery production system, cotton processing, textile weaving and natural cotton dying. 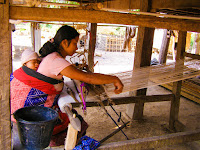 These are their cash income generating activities. Moreover, their traditional food, Thai Lue homestay, traditional show and Baci ceremony are the most enjoyable things that you can share together with them (at least once in a life time).

Let’s discover this Ban Nyor village, situated 57 Km from Xay Town on the road to Pakbeng in the economic corridor between China in the North, Vietnam in the East and Thailand in the West.  This unique location provides lots of economic as well as touristic opportunities.
Ban Nyor is a long time handicraft production village and the activity consists of pottery production, cotton processing, natural color dying and basketry.

These activities are recognized as cash income generating sources for them. Pottery production: Pottery has a long history in Northern Laos, and for centuries people have produced bowls and jars. All pottery is handmade, in former time the pottery was just produced for family use, but with the increase of tourism the product range was expanded several new products including flower vases, candlesticks, decorated bowls and jars with different sizes based on the market demand.

These products will be sold to hotels, questhouses, restaurants and local traders. Cotton processing: The warm climate makes cotton to grow well. Most of the cotton is processed into twin, colored, woven and sewed in the village. All steps are always done by hand and no chemicals or other ingredients that can’t be found in the village are used. Therefore, there is now a chance for tourists who are interested in local handmade products can discover and experience the Lao way in producing handicraft products. Basketry: Basketry is a bamboo product and Lao people have been producing this kind of bamboo handicraft for thousand years mostly just for family use and it’s now turned into family business to generate daily cash income. Tourists can also experience how to study and make different types of these products by learning from the local producers in Ban Nyor and hope they can bring these lessons and experiences back to show their families and friends.

Thai Lue Homestay: There are home stays available there in Ban Nyor, so visitors can stay overnight there as long as they can (20,000 Kip per night). Just to spend your time at least once with the local Thai Lue’s life. You will see what you have never seen before.
Nam Haeng Cave

Nam Haeng cave is stuated in Ban Nam Haeng Village about 12 Kilometers from Meuang Beng town. The road is still in bad condition (Dirt road). The interesting features of the cave are beautiful cave formation like stalacmites and stalacties plus different natural species and plants around. It’s a nice place for having picnic and relax naturally after getting tired from your weekday.
In 1992, there was a man called Mr. Derm went hunting and then found this beautiful cave. He explored almost every corner of the cave. When he arrived home he told villagers about the beautiful cave he found and then what villagers were told became a big rumor all around the village. There is also a stream called Nam Haeng flows along the mountain where the cave is stuated inside. Therefore, the cave was named Nam Haeng cave since then. One more reason why the village and the stream was named Ban Nam Haeng is just because there was a man named Haeng moved from the East of the region to this area (The current village) arond 940 years ago. He was the first man who came to settle in the area, so both the village and stream was named Ban Nam Haeng Village and Nam Haeng stream. This background information was taken from Uncle Theun  in Ban Nam Haeng Village, Beng District, Oudomxay Province.
Nam Chae waterfall
Nam Chae waterfall is situated on the west of Ban Tha Meun village, Beng District, Oudomxay Province. The way to the waterfall is in a bad condition, from the village to the waterfall is 4 Km. The key point of this waterfall is covered by nice forest all around. The waterfall has two levels – the first level is 7 Meters high and the second one is 8. In 2007, the access road (3 Km) to the waterfall was supported by Salika company.


According to the story told by an elder in the village, the said waterfall used to be a residence for a big Naga (Snake) in the past and a place where covered by lots of tea trees around. People wanted to get tea, but the Naga was there, so no choice. The serious battle between the Naga (Snake) and human started. Finally, the Naga lost. Then, people can go there and collect tea there. The area was considered as a tea area. Therefore, the Name of the waterfall was named Chae waterfall. (Jae means Tea in Lao language ).

Where to stay in Meuang Beng


Where to eat in Beng district