Enjoy the rich culture of Lao PDR, concentrated in Oudomxay. We offer you authentic cultural experiences. A total of 12 ethnic minorities, each with their own languages, cultural heritage and lifestyles. For more information please see the tours and the activities we have organized for you.
Lao tribe 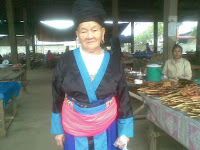 Hmong people are part of the Lao Soung, the "High Lao". They came to the area of now Lao PDR around 150 years ago after they lived several thousand years in the region of Southern China.More info 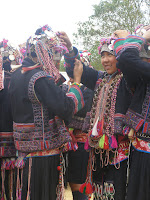 Akha are the fourth biggest ethnic group in Oudomxay and form part of the Lao Soung like the Hmong people. Acca immigrated from the Tibetan Plateau, Northwest of Oudomxay, several hundred years ago. More info 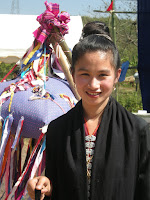 Originally, the Yang people moved from The South of China and then to Xern La and Lai Jao, Vietnam. After many years some of the Yang people decided to move from Vietnam to Laos, especially in Oudomxay Province. The Yang tribe is now in 3 districts such as, Meuang Namor, Meuang Beng and Meuang La. More info 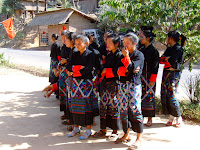 Actually, the background of the Tai tribe is similar to Lao and Thai Lue minority. Originally, Tai tribe moved from the South of China along the Mae Nam Dam River and Nam Mao River and then continued moving to Xern La, Lai Chao and Dienbienphu Province, Vietnam and after many years some of them decided to move to Laos, especially in Oudomxay Province. More info