Namor is an attractive district in Oudomxay Province, located in the Northwest of the province. The district covers an area of 1,875 square kilometers and about 52 Kilometers away from Xay town. The main district area is on the road (No 13 North) to Luangnamtha Province and China border.  Namor district consists of 62 villages and 6,460 families. The total population is 38, 417 (female: 18,876). A place where you can find out more multi local culture surrounded by different tribes such as Hmong, Khumu, Yang, Hor, Phounoy, Lenten, Lue, Thai Dam and Phouxang. The majority of the people there are animists.
The language used is Lao and other tribal languages. The purpose to visiting Narmor District is to perceive and experience different hill tribes, livelihood, as well as their own unique cultural practice. You can also visit the well-known underground water, which is come out from a small cave, the best place for local people for having picnic, relax, swimming and others.
The slogan for the district is Try bitter bamboo shoot - Good to see the underground water – covered by 12 ethnic groups. 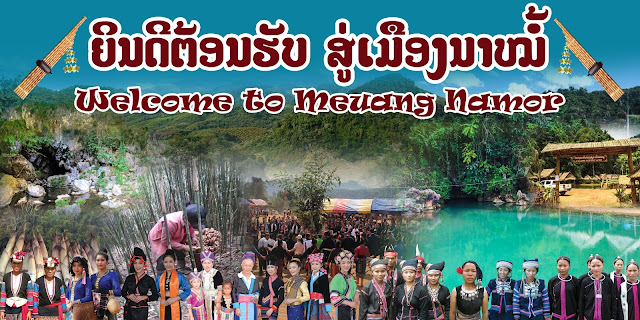 What's to see in Na Mor
- Walk around the town to see what people do in their daily life.
- Visit Morkferk cave.
- Visit Pangsa hotspring and soak and refresh your foot or body there.
- Experience the underground water/spring water where you can swim and relax only 8 km away from M. Namor.
- Visit Ban Namor Neua village where you can experience the real culture of Tai Dam ethnic group.
The underground water
The underground water is situated about 8 Km from Na Mor town and 1 Km away from the main road (No. 13th North road). The source of the underground water is from a small cave inside a long big mountain which people can not enter till the end because of difficulty and danger. Only 4 Km explored and surveyed by the Europe Cave exploration team in 2010. The potential of this underground water is appropriate for friend and family weekend activity. A place to relax by the charming nature with clean water.
The underground water was discovered in 2000 by local villagers and people started going there in 2003, is a nice place, followed by beautiful nature and pure water – the spot by the water outlet is like a pool, people can also swim around. There are 2 streams connected to each other such as, Houaykasa and Houay Han stream, both streams are from the same source with the same mountain in Ban Nam Pit. There is a small beautiful waterfall inside – about 150 – 200 meters from the water outlet. Its height is approximately 5 – 10 meters. There’s a shape like a buddha statue on the top of the waterfall and now it's become a famous place for local people to relax during their weekend.
Thai Dam village
Ban Na Mor is a Thai Dam village about 7 Km from Na Mor town. The village is located nearby the main road. The majority of the residents there are animist. The key feature of the village is the living way or livelihood, is totally different from other tribes. For instance, culture, festival cerebration, clothing, traditional music, various types of hand made products and others. It’s an interesting and must see village.
Thai Dam tribe moved from Meuang Lai – Meuang Than, Vietnam during the Indo China War around 200 years ago. Only a few family first moved to the area at the beginning. They prepared a large area for rice cultivation and did pottery production for a living - as hand made products for sale. Na means “rice field” and Mor mean “pot” that’s why they named their village Na Mor and the name has been using until today.
Hotspring
The area of the Hot spring water used to be a salt mine in 1909 operated by Mr. Lee Xang, from China. The salt production made 400 m3/per day. Since the salt production appeared, people started to die one by one each week. According to the prediction by village elders, it’s said that there is a devil (a bad spirit) who often needs human’s life due to destroying and disturbing the area.      The village leader found that this problem will surely destroy the people in the village more and more in the future, so he decided to ask Mr. Lee Xang to stop collecting and producing salt in the area, but Mr. Lee Xang refused his attention and he continued his production and people still die continuously. Mr. Lee Xang saw the situation and decided to take a man to kill for sacrifice as a secret. Nothing happened until 2 years and after that an unexpected problem happened to the village leader, he passed away and became a big tiger and always appear around the salt production area. One day, he got into Mr. Lee Xang’s dream about stopping the salt production (if you don’t stop the production – I will kill you and all your workers as soon as possible). The dream made Mr. Lee Xang afraid so much, but he still needs the salt mine, but no choice. He finally decided to destroy all his machines away and throwed them into the salt mine and then moved back to China. After that people called the area Hot spring water.
Nong Nyeung reservoir
Nong Nyeung reservoir is situated in Ban Phou Li – far from Na Mor town about 24 Km. The road is in a bad condistion. The key interesting point is that there is water source on the top of the mountain and there's water all year long and all seasons. The shape of the reservoir is square – 80 meters wide and 160 meters long. There are so many different types of species and plants all around.

Nong Nyeung “ Hmong people used to call it: Pa Za” Pa Za means a Naga’s  lake (Big snake). The present Nong Nyeung reservoir used to be a Hmong Village before. According to a story told by a village elder, once upon a time in Ban Pou Li,  there was a white deer appeared and ran into the village and then the village residents saw and helped each other to catch and kill it for food and then finally give each piece to each family except one widow who did not join in the hunting time. That’s why villagers did not give her any pieces of the white deer's meat. That night there was a strange, old and tall man  (The big snake transformed to be that old man) came straight directly to that widow and asked  “ What have you had for your dinner? answered by the widow: I ate only rice and some chilies for my dinner. The old man said: I walked through every corner of the village I saw each family enjoyed eating the white deer and if you have not had it – "Good" and I am telling you that tonight there’s going to have a heavy rain, big storm and flood and if the thunder storm shines to the North you have to run to that direction to survive. After the old man left, the rain and thunder storm started to happen from the skies above seriously. That widow did and followed as the old man said. She ran and followed along the direction where the thunder is shining. The heavy storm became a serious flood all over the village and everyone died – no one survived at all. The widow came back to the village in the next morning and found that the village is no more, the village became a big lake  - everywhere is water. She was the only one who survived because she did not eat the white deer. Therefore, the Nong Nyeung reservoir is still  there until today. The histroy infrmation is Mr. Xay Ker Yang in Ban Phou Li.


Where to stay in Meuang Namor District

Where to eat in Namor district