Oudomxay The heart of northern laos

Oudomxay is one of the most beautiful places in Laos, located in the upper North. A place where you can experience untouched nature as well as cultural life. According to visitors - the most friendly people on earth, the most peaceful  place in the region.
We, from the Provincial Information,Culture and Tourism  Department would like to offer you this site as a first impression on the treasures of Oudomxay and provide you all the information needed for a pleasant stay.
Welcome to Oudomay Province “The Northern city - sea of clouds with different hill tribes”. Let’s discover Oudomxay, The land of the charming nature, livelihood, tradition, culture as well as different ethnic groups. This beautiful region links to Vietnam, China and Thailand. Ouodmxay is now identified as a target trading and investment municipality. 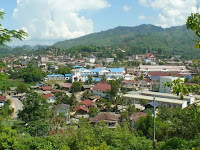 In the past 50 years, Oudomxay was only a part of Luangprabang Province. It was upgraded to be another province of Laos in 1960 (19th Century). In 1961, The King of Luangprabang first named the province “Souvanhnaphoum Province”. After a few years, the name of the province was changed again to “Lan Xang Province”. In 1965, it was changed to Meuang Xay Province and then the province got the final name called “Oudomxay Province” in 1969. The name has been using until today.
Tranquil, beautiful and sometimes hidden in the clouds, Oudomxay is located in the heart of northern Laos and is one of the most accessible of the far northern provinces. The rugged mountainous landscape has peaks up to 1,850 meters covered in varying forest types and wider fields. The province’s three main rivers are MeKhong, Nam Park, Nam Beng and Nam Kor. Oudomxay is mainly populated by the Khmu, Hmong and lowland Lao, with a total of 12 ethnic minorities, each with their own languages, cultural heritage and lifestyles.
Oudomxay xay is considered as one province that has lots of potential on trade. It creates lots of interests for both domestic and foreign business investors. The majority of business activities are agriculture, livestock, and entrepreneurship, investment in different industries like dam, hydro power, mining, rubber tree plantation, crops and others. Most of the business investors are from China, Vietnam, Thailand and Myanmar as well as some domestic investors from different provinces. Moreover, the province is also focusing on tourism development, marketing and services. The whole income of each year is approximately 10 million US Dollars. The number of tourist visiting Oudomxay each year is around 180,000 people (22% increases each year). Oudomxay is the center of all Northern provinces, so people always pass through and we do hope that the province is going to be one of the most attractive places for people in the future. There are quite many tourist destinations in the province. For instance, Chom Ong Cave “the land of caves”, Tadnamkat waterfall – Namkat Yolapa Resort, the Sacred Phachaosingkham temple, Nam Hin Lake, the 600 hundred year old Phouthat stupa in the center of the town “the symbol of Oudomxay” and many more.

This website focuses on some key tourist destinations – serviced areas as well as their information, Hotels and guesthouses, city map, and emergency calls. It helps you to find what you want to do and see in Odomxay and where to stay and eat with different prices.
When you are in Laos, do not forget to visit Oudomxay “The Northern city - sea of clouds with different hill tribes”. We are sure that you will not be disappointed to visit this area. Furthermore, you can also find different tour packages at the Oudomxay Tourist Information Center “www.oudomxay.info, info_oudomxay@tourismlaos.org, saijaiyang@gmail.com, Aae_vilaiphet@hotmail.com.

Oudmxay is a province of Laos, located in the Northwest of the country. The province capital is Meuang Xay. The Province covers an area of 14,400 square Kilometers (5,930 sq mi).  China to the North, Phongsali Province to the Northeast, Luangprabang Province  to the East and Southeast, Xaingabouly Province to the South and Southwest, Bokeo Province to the West, and Luang Namtha Province to the Northwest. The topography of Oudomxay is mountainous, between 300–1,800 meters (980–5,910 ft) above sea level. Oudomxay province consists of 7 districts: Meuang Xay, Meuang Namor, Meuang La, Meuang Beng,  Meuang Hoon, Meuang Pakbeng and Meuang Nga.
The population of the province is 300,447. The exact proportions of the approximately 12 different ethnic groups “more than 20 different clans” living in Oudomxay are still not precisely known. According to the province administration, the following estimations can be assumed; Khumu (among them Khmu Lue, Khmu Khong, Khmu Ou, Khmu Bit) 60–80%, Lao Loum 25%, Hmong (among them Hmong Khao, Hmong Dam und Hmong Lai) 15%. Other ethnic groups living in the province include Akha, Phouthai (Thai Dam & Thai Khao), Phou Noy (Phou Xang, Phou Kongsat, Phou Nhot), Lao Houy (also „Lenten“), Phouan, Ly, Yang, Ikho and Ho.
Since some years, efforts are taken to support tourism in Oudomxay, which is considered a chance to solve poverty of the population. A tourism office has operated in Meuang Xay since 1997, supported by German Development Service (DED) since 2005. The support of DED aims to raise the incomes especially of the rural population and small-scale enterprises by tourism and thereby protect natural resources.In August 2007 the tourism office was upgraded to a “Provincial Tourism Department”. Due to Oudomxay’s location as the most important traffic junction in Northern Laos – We call “Oudomxay is the Heart of Northern Laos”.  The Provincial Tourism Department was joined together with the Oudomxay Provincial Information and Culture Department in 2012. It’s now the Oudomxay Provincial Information, Culture and Tourism Department. In the past few years the province was mainly visited by foreigners on the journey through. The average length of stay was low. But now due to many tourist attractions are developed and the increasing number of tourist is getting higher and higher. We do hope that in the future Oudomxay will certainly become one of the most attractive places to discover for all domestic and foreign tourists.